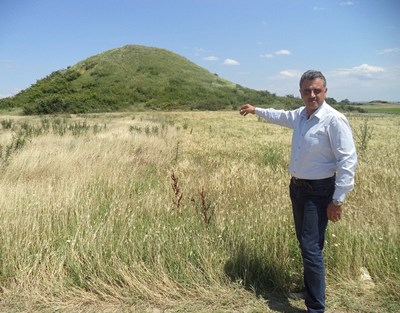 Maltepe is of enormous proportions and because of that it was preserved from looters, said the mayor of “Maritsa” municipality Mr. Dimitar Ivanov.

An unknown Thracian leader and members of his family were buried in Maltepe – one of the largest mounds in Bulgaria and on the Balkan Peninsula, which is located near the village of Manole. This stated was announced by the Director of the Plovdiv Archaeological Museum Assoc. Prof. Kostadin Kisiov. The cult object is only 17 km away from the city and it is with huge dimensions. The diameter of the embankment which was erected by human hands, is 110 meters and the height of the mound is 26 meters. It has not been robbed so far, because it is not an easy target for the looters. Only a shallow trench made by treasure hunters is visible on its top.

Experts are adamant that looters have failed to reach the sarcophagi. The conducted geo-physical survey of the upper Maltepe, which was made more than 10 years ago, revealed the presence of 7-8 graves.
In the center of the mound is the tomb of a local Thracian ruler.

“Maritsa” Municipality, on which territory is the object, has prepared a project for its excavation and the construction of an open-air museum. There is such a museum in Vergina, where the tomb of Philip II of Macedonia is.

“The exhibition will display the artifacts from the mound. The tomb of the Thracian ruler will be preserved and open for visitors”, explains the mayor of “Maritsa” municipality Mr. Dimitar Ivanov. The first stage of the project envisages a survey of Maltepe and strengthening of the more complex tomb facilities, as it is prescribed by the Ministry of Culture. In the second stage the infrastructure will be constructed. It is envisaged that the whole terrain around the earth embankment to be formed as a park with the traditional for the region trees – acacia, lime, oak, black poplar, hazel. Alleys will be built, as well as drinking fountains, rest areas, information center, a parking lot for buses and cars. Access for students and their teachers will be free.

The municipality has applied with this project for funding under the Norwegian grant program.