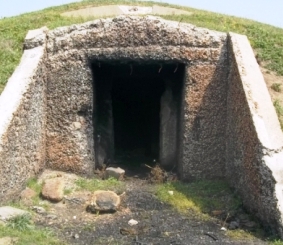 The archaeological summer of 2015 for the Plovdiv team of the head of Regional Archeological Museum Assoc. Prof. Kostadin Kisiov will pass under the sign of the digging up of the largest Thracian mound in Bulgaria – Maltepe, near the village of Manole. ”Maritsa” municipality has prepared a project for the exhibiting of the mound which is 26 meters high and with a diameter of 150 meters. The museum will be on open-air one, as it is with the tomb of Philip II of Macedonia in Vergina.

Assoc. Prof. Kostadin Kisiov announced in front of the colleagues from PlovdivskiNovini.com that this mound was erected in 4-5 stages and has about eight noble graves. He believes that unique treasures will be found in the tombs. “Thracian family tombs are hidden underground. The mound is huge and requires organized excavations in an archaeological expedition. The height of Maltepe is 25 meters. It is several times bigger than the mound, under which appeared the unique tomb of Starosel.

After the excavations everything which will be found there will be exhibited on the site and Maltepe will become the biggest open- air museum in the Balkans.”,says the director of the Archaeological Museum in Plovdiv.

There were no studies of Maltepe so far. Excavations were made of the neighboring mound with dimensions of 3 to 15 meters. Under the embankments a crematory was found where the members of the noble families were burnt. We found one meter of ashes with many animal remains and 7-8 individuals as well as ceramics, said Assoc. Prof. Kisiov and he specified that after that the aristocrats were buried at Maltepe. Whether only men have been buried or women as well, will be clarified during excavation process.
It is assumed that the earliest burial of level 0 is from V-IV century BC. Geophysical survey has been done up to 10 meters and it shows/indicates presence of tomb facilities, says Assoc. Prof. Kostadin Kisiov. The Maltepe project will be carried out in two stages. The first one involves the opening of the tombs and their conservation on the spot.

The second stage will be the construction of the infrastructure – parking lot, lighting, tourist center and a building for the exhibition of the finds. “The mounds serve as a site for tourism as well. Except making excavations expositions should be done. It will be very good if an overall concept is developed for any mound to be transformed into a museum and a tourist site.”, says Assoc. Prof. Kostadin Kisiov.